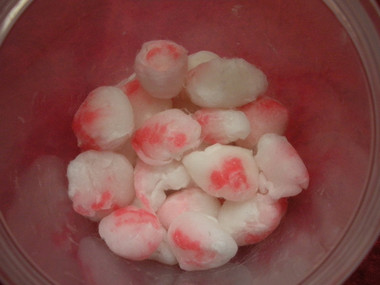 OIL AND SERUM THAT IS "MIRACULOUSLY" COMING FROM THE MIRACULOUS ICON ®in Father David's Chapel! 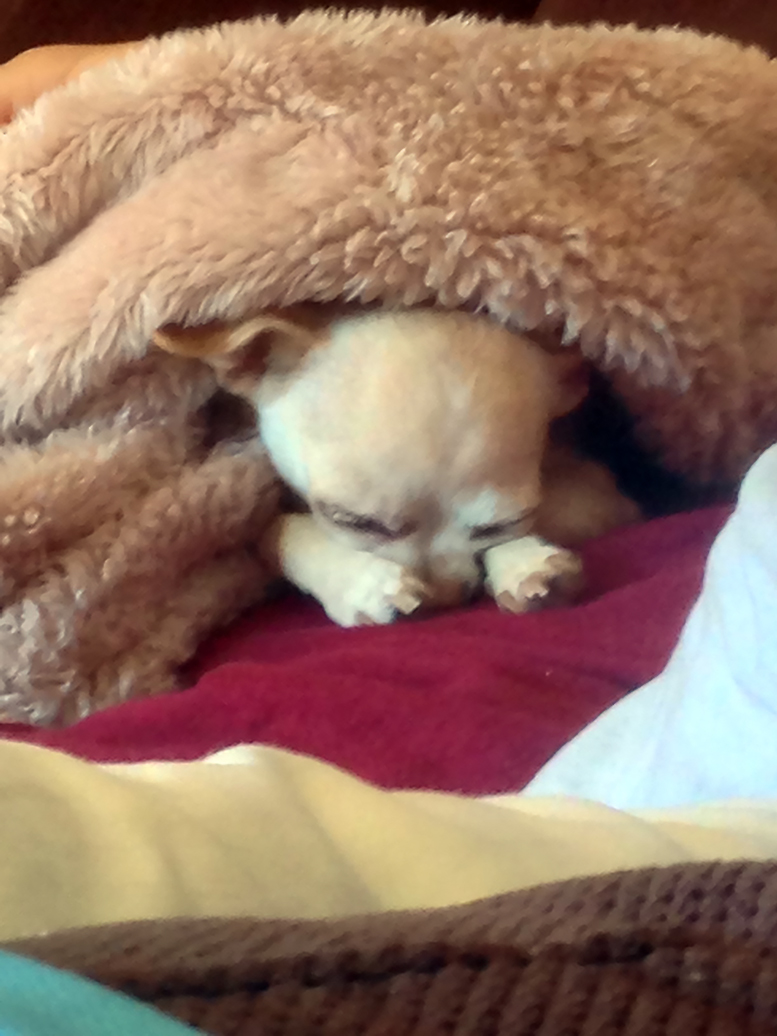 Limted Quantity. Only 1 or 2 left.

5 "MIRACLES" FROM THE VERY SPECIAL OIL THAT IS "MIRACULOUSLY" COMING OUT OF THE MIRACULOUS ICON "OUR LADY MEDIATRIX OF ALL GRACES" AT THE ALTAR IN FATHER DAVID'S CHAPEL!

(NOTE: THERE IS A VERY VERY SMALL AMOUNT OF OIL AVAILABLE FOR A SET DONATION TO FATHER'S ORPHAN CHILDREN)

THE FIRST "MIRACLE": Father David explained to Francis, the Founder and Director of Mary's Way Worldwide Apostolate that "After he received The Miraculous Icon ® of "Our Lady Mediatrix of All Graces" ® he blessed the Icon.  THE NEXT MORNING OIL BEGAN TO COME OF THE ICON!"  He gave me 12 photographs that he and his brother priests had taken of the Oil that is miraculously coming out of the Icon. The oil kept coming out as if through hundreds of tiny pores in The Miraculous Icon, and is also streaming down the Icon which can be seen in the photographs. So much oil was coming out of the Icon that Father decided to put a sterling silver vessel under the Icon to capture the oil.

(See some of the photographs of the Oil that is miraculously coming out of The Miraculous Icon on this website which are also shown and explained in my book "Everything You Need To Know To The Survive The Worldwide Chastisement....")

THE SECOND "MIRACLE": THE VERY SWEET HEAVENLY FRAGRANCE OF LILIES, ROSES, AND LILACS IS COMING OUT OF THE OIL THAT IS COMING OUT OF THE MIRACULOUS ICON that belongs to Father David which still hangs on the wall, behind his altar, in his Chapel where he says his daily Masses!

THE THIRD "MIRACLE":  I brought the Oil to our Mary's Way to Jesus Apostolate in New Jersey and used one of the cotton balls with a very small amount of this very special Oil on it, and touched all of our 12 Way All Protecting Scapulars, all of our Our Lady and Padre Pio Icon Images, Icon Tee Shirts, Rosaries, and Icon Medals to this very special Oil.

THE FOURTH "MIRACLE":  WHEN SOME OF THIS VERY SPECIAL OIL RAN DOWN ONTO THE FACE OF JESUS, SOME BLOOD SERUM WAS NOW MIXED IN WITH THE OIL as shown in the four pictures below (see also these photos in our book). THE BLOOD SERUM ONLY APPEARED WHEN IT CROSSED ONTO JESUS' FACE! The Miraculous appearing blood serum is now prominently showing itself on a few of the cotton swabs. This very special Oil and that has mixed with blood-like serum becomes more obvious on the cotton swabs. The top right photo, the bottom left and bottom right photos show just oil alone streaking down. The top left photo is when just the Oil crossed Jesus' face and seemingly miraculously while on Jesus' face started to turn to a blood serum like color!

THE FIFTH "MIRACLE":  In December of the year 2014 - Jonas B. called Francis at Mary's Way to Jesus Apostolate and said his extremely tiny 10 year old, 4 pound dog shown above, a very rare "Tea Cup" Chihuahua named "Nina", had gotten deathly sick due to her being poisoned by eating a dog treat that was made in China.  Jonas rushed "Nina" to his a veterinarian hospital to try to save her life!  He went to several dog doctors who all tried to save his beloved pet, tiny "Nina" from dying.  All throughout this very tiny "Nina" became sicker and sicker.  Finally the dog doctors who specialize in treating poisoned animals said they did all they could to help tiny "Nina" and that she was dying and very near death.  THE DOCTORS TOLD JONAS THAT LITTLE "NINA" WOULD DIE IN A WEEK AND THAT THERE WAS NOTHING MORE THAT THEY COULD DO!  Her condition was extremely grave to the point of death.

Jonas told me that due to the poisioning, tiny "Nina" also had a rare condition in very tiny dogs, which is known as patellar luxation, that affects the knees and causes pain, inflammation, and premature arthritis. The symptoms start as a limp and can process to weaken legs and even loss of leg movement due to the intense pain.  Surgery can help many, but not all dogs depending on the severity of the problem. Toy dogs, which weigh under 7 pounds, seem to be prone to this condition.  BECAUSE OF THIS, "NINA" WAS NOW ALSO COMPLETELY PARALYZED AND COULD NOT MOVE AT ALL.

Jonas telephoned Francis, the founder and director of Mary’s Way Apostolate, and very humbly said “I hope it’s okay. I’d like for you to have a candle lit for my very sick dog "Nina" and also have Masses said by Father David for little "Nina".”  Realizing how attached Jonas is to his very tiny Chihuahua dog, I was inspired to tell Jonas about The Very Special Oil that is coming out of the Miraculous Icon, Our Lady Meciatrix of All Graces, which Father David blessed, that was located in Father David's Chapel where he says his daily Masses.

So when Jonas called, so worried about his dying dog, I offered him a very small amount of this very special Oil for a contribution to help Father David's orphanages and his orphan children many of whom are extremely sick, need operations, and some are to the point of dying.  I told Jonas "I could not make any promises at all of any miracles coming" but that we would both pray as hard as we could for a miraculous cure. I sent the Oil and Jonas made a contribution to Father David for his orphans and the orphanages for the Oil.

The Holy Spirit guided me to tell Jonas to put the Oil on Nina’s forehead and make The Sign of The Cross, and say “In the name of the Father, and of the Son and of the Holy Spirit, Amen,” then do the same on all four of her paws.

Jonas had told me about "Nina’s" favorite place in the park where they played, under a certain tree. I told him after the blessing with this Oil, bring her to the park and gently place "Nina", who was definitely dying, under that tree.

I did not speak to Jonas again for 4 months.  I feared that little "Nina" had died and I would not know what to say to him. Years ago my 13 year old German Shepherd dog named, "Angel", died and I know how hard it was to lose a pet.

WHEN JONAS DID CALL ME 4 MONTHS LATER, HE SAID "'NINA' WAS MIRACULOUSLY CURED"!  SHORTLY AFTER THE OIL WAS WAS APPLIED, "NINA" BEGAN TO GET BETTER AND BETTER AND WITHIN 2 WEEKS SHE WAS COMPLETELY HEALTHY AGAIN!  Jonas told me that "Nina" is now running around her favorite tree in the park every day now. I was absolutely elated!  I just received another update from Jonas about "Nina".  Nina's doctor said her blood count is normal.

This apparent "miracle" shows God answers all prayers!  God answers all prayers especially when those prayers are most humbly given by us to His Most Holy Mother Mary under her most powerful role and title as "Our Lady Mediatrix of All Graces" and she personally presents them to her Son Jesus!  "To Jesus through Mary".

God answers all prayers in His own time - whether it be for God's people or in this case through His creatures!. Saint Francis of Assisi knew how precious all creatures are to God.  “Are not five sparrows sold for two farthings, and not one of them is forgotten before God” (Luke 12:6)

If you have a very sick relative or friend (or pet as was in this case) pray to Jesus through "Mary Mediatrix of All Graces" which is a doctrine of the Catholic Church, for their health. “With God all things are possible”. (Matthew 19:26) 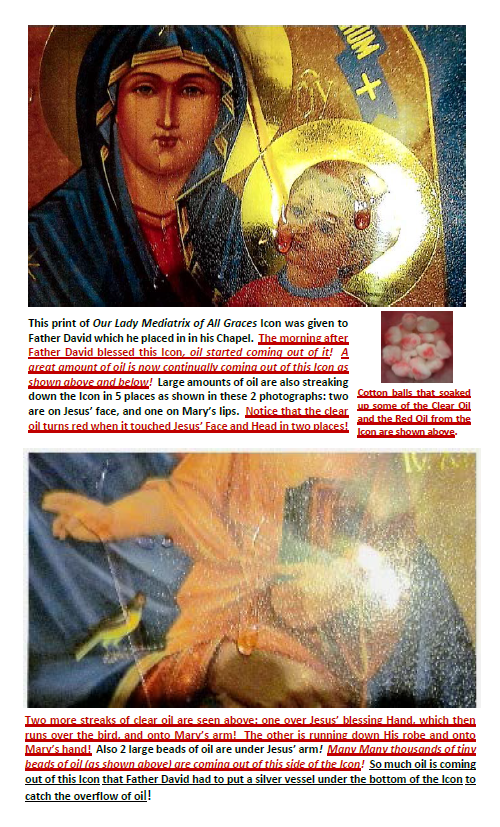 IN THE PHOTOGRAPH AT THE TOP OF THE FIRST PAGE OF "NINA" IT LOOKS LIKE TINY "NINA" HAS HER LITTLE PAWS TOGETHER IN PRAYER, THANKING GOD FOR SAVING HER LIFE AND FOR ELIMATING ALL HER PAIN!

Contribution for this extremely rare Oil which is miraculously coming out of "The Miraculous Icon" is to help Father David's orphnan children and orphanages as shown elsewhere on our website.  WE MAKE NO PROMISES OF ANY CURES COMING ABOUT.  We can only continually pray as hard as we can "to Jesus through Mary, 'Our Lady Mediatrix of All of God's Graces' for a healing or for a miracle to come about.  In this case a "miracle" actually happened - praise God!

You will receive one small cotton ball which has the oil on it as shown in the above photographs, in a small 1 inch by 2 inch clear plastic container, and a small photo of the oil miraculously coming our of The Miraculous Icon.  Use it sparingly, by taking your index finger and very lightly touch your finger to the cotton ball in the container - with a small amount of the oil on your finger and bless yourself (or others) with The Sign of The Cross and continually pray as hard as you can!

Also, pray the three "All Healing Prayers" on our Prayer Card we will also send to you, which has 4 Imprimaturs and 2 Ecclesiastical Approvals from 6 Archbishops and and Bishops: The 3 Prayers are "The Act of Perfect Contrition",  "The Act of Consecration To Jesus Through Mary Mediatrix", and  "The Most Powerful Petition Prayer".   Follow the instructions on our Prayer Card about how to pray these three Prayers which we will also send to you with the oil, and a small photo of the oil miraculously coming out of the Miraculous Icon.

This product hasn't received any reviews yet. Be the first to review this product!