ALL 4 MARIAN DOGMAS IN ICON; ICON AT VOX POPULI

ALL 4 MARIAN DOGMAS IN ICON; ICON AT VOX POPULI

The Miraculous Icon® is one of the world’s richest Icons - with 545 iconic details!

The Icon includes all four Marian Dogmas: “The Mother of God”, “Perpetual Virginity”, “Immaculate Conception”, “The Assumption”; the proposed 3-part final Marian Dogma: Our Lady Mediatrix of All Graces®, “Coredemptrix”, “Advocate”; all 7 of the most important stages of Mary’s life: “The Annunciation”, “the Visitation”, “The Nativity”, “The Presentation”, “The Finding in the Temple”, “The Wedding of Cana”, “The Crucifixion”; every vital part of Mary’s life: “The New Eve”, “The New Adam”, “The Woman of Revelations”, etc.

“The Mother of God” The First Marian Dogma is depicted by Mary holding her young Son, the Son of God in her arms.

“Mary’s Perpetual Virginity” The Second Marian Dogma is represented by the three eastern stars symbolizing before, during, and after birth.

“Mary’s Immaculate Conception” The Third Marian Dogma is represented by the two intertwined wedding rings symbolizing infinity, in the heart pointed to heaven depicting the purest union of Mary’s Mother and Father at conception, depicted by the upright seed-like middle of the intertwined rings.

“Mary’s Assumption” The Fourth Marian Dogma is depicted by the clouds alongside Mary standing at the Cross – depicting her eventual Assumption into Heaven.

“The Annunciation” (Luke 1:35) “and the Angel said to Mary ‘The Holy Spirit will come upon you and the power of the most high will overshadow you’”. In The Miraculous Icon®, the Dove of the Holy Spirit is very visibly upon Mary, on her forehead, between the gold border on her head-covering and her dark eyebrows. The form of The Holy Spirit is visibly there and still upon her for all to see!

“The Visitation” is in the upper right corner symbolically depicting Mary going in haste to her cousin Elizabeth. Mary is standing at the beginning of the pathway; Elizabeth is depicted by the extended stomach, with John spiraling about with joy in Elizabeth’s stomach. The end of the path shows two prongs indicating the two natures of the God-man Jesus greeting John in the womb.

“The Nativity” the guiding “Star of Bethlehem” in the dark blue night sky is depicted on the upper-most part of Our Lady’s head-covering – again leading all to Jesus through Mary.

“The Presentation” Our Lady tensely clutches her light blue handkerchief in the hand, and is inescapably wrapped around Mary’s thumb of the arm supporting Jesus. This depicts Mary’s hidden, intense suffering and great sorrow and much crying for all those rejecting Our Lord’s teachings as foretold in the Prophesy of Simeon (Luke 2:34-35).

“The Finding in the Temple” Mary did not understand why Jesus had to be in the Temple. Mary said, “Son, why have you done this to us? You see that your father and I have been searching for you in sorrow.” (Luke 2:48) The inescapable sorrow of the loss of Jesus is depicted by the tear-filled, large, light blue handkerchief tightly clutched in Mary’s hidden hand, inescapably wrapped around her thumb. Its light blue color is the same light blue color of Jesus’ hidden tunic, shown in small part around His neck, with the vast hidden part depicting the hidden understanding “And they did not understand the words He spoke to them.” (Luke 2:50).

“The Wedding of Cana” is depicted in the upper left corner of The Miraculous Icon®.

“The Crucifixion” is depicted chronologically in the upper right corner.

“The Old Eve” in the Garden of Eden” is depicted in the upper left corner by the symbols of the forbidden fruit that Eve was tempted with by the serpent. The apple in the left corner has a hole in it depicting the hollowness of the serpent’s promise and the bite taken out of it by Eve. The fall from Eden is shown by the stem pointing down to earth.

“The New Eve” is depicted chronologically in the upper right corner by Mary crushing the head of the serpent, shown recoiling in pain under the ground.

“The New Adam” is also depicted in the upper right corner with Jesus doing the will of God the Father, in complete obedience to God’s will, by offering His sacrifice on The Cross for our sins.

“The Woman of Revelations” (Rev. 12:1-18) is completely surrounded by four layers of pure 24 karat gold leaf on the original Icon, that is, “a great sign appeared in the heavens, a woman clothed with the sun” (Rev. 12:1). “And another portent appeared in the heaven, a great dragon with seven heads and ten horns, and seven diadems upon his heads” (Rev 12:3). Above and left of Saint John is the dragon in the sky. “Our Lady Mediatrix of All Graces®” through her most powerful role will protect us from harm – through all of the Graces of God given to her to dispense to everyone. 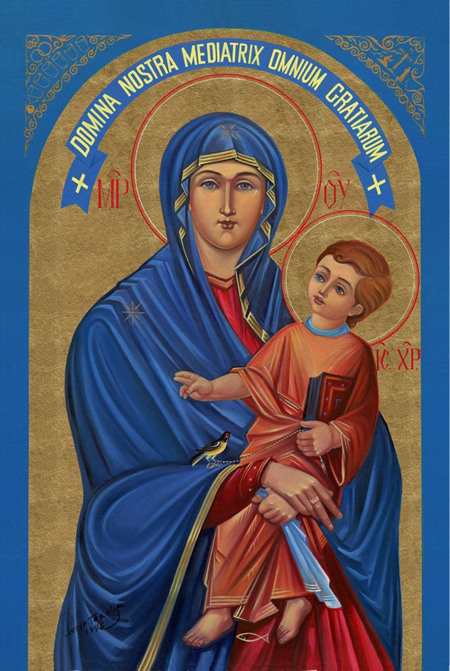 On May 13th. 1997, again on the Feast Day of “Our Lady of Fatima”, the alleged Fatima-Linked Sacred Icon Our Lady Mediatrix of All Graces®,… was invited by Dr. Mark Miravalle, the International President and Founder of Vox Populi Mariae Mediatrici, and was very specially honored at the two largest ‘Vox Populi Mariae Mediatrici’ International Conferences” in Rome. Dr. Miravalle met with the Icon’s caretaker and encouraged him to bring the vitally important Original Icon of Our Lady Mediatrix of All Graces®… to Rome.

(The Icon’s caretaker had exactly 13 days [again for Fatima] to create and fly out Dr. Miravalle’s very large order of 200 large framed Mary Mediatrix Icons which weighed 1,240 pounds, 200 specially made Booklets, and 200 personally addressed letters for the May 26 flight to Rome.) More Graces: the Airline gave us a Special 75% Discount on our cargo fee to Rome. The Italian Customs gave Mary’s Way Apostolate a Special Duty-Free Exemption. The Duty-Free Special Exemption Paperwork which went through many Italian Customs Departments took eight hours and most surprisingly has 10 Customs Seals and 13 Signatures on them – again Fatima.

The Mary Mediatrix Icon was the only image invited to be displayed at the two International Conferences for Vox Populi Mariae Mediatrici. This extremely large, International Laity Movement with over 8,000,000 participants from 165 countries in all 6 continents for the hopeful Final Marian Dogma was Directionally Named “Vox Populi Mariae Mediatrici” which tellingly means “Voice of the People for Mary Mediatrix.” The “Voice of the People for Mary Mediatrix” international group prints Michelangelo’s Pietà on all its printed materials and banners which the Mediatrix Icon was, as a very profound sign, unexpectedly and inescapably next to Michelangelo’s Original Pietà in Saint Peter’s Basilica for exactly 33 hours.

At the International Conference, the Original Icon of Our Lady Mediatrix of All Graces®, was placed next to a very large Vox Populi Banner with a picture of Michelangelo’s Pietà on it, and directly under a large picture of Pope John Paul II which, also tellingly, the Original Mary Mediatrix Icon was also with Pope John Paul II in a private audience in the Apostolic Palace. At the two Conferences, the Mary Mediatrix Icon was placed on a large easel, on a high stage, in front of the Cardinals, Archbishops, and Bishops and Internationally renowned theologians who gave 6 days of lectures, in part, about “The Catholic Church’s Doctrine: Our Lady Mediatrix of All Graces” and the importance of being proclaimed a Dogma.

At the 1997 International “Vox Populi Mariae Mediatrici” Conference which translates – “Voice of the People For Mary Mediatrix.”, over 200 Bishops, Archbishops, Priests, Cardinals, Renowned Theologians, and Marian Leaders from 50 Countries attended this important three-day Conference in Rome. At the Conference, the International President and Founder of “Vox Populi Mariae Mediatrici”, Dr. Miravalle, a Theologian, gave several lectures, in part, about Our Lady Mediatrix of All Graces®. Dr. Miravalle proceeded to give a special talk which was tape recorded about this extraordinary, singularly unique Icon Our Lady Mediatrix of All Graces®. Professor Miravalle stated “….An Icon is not simply a picture. In some real sense, it portrays a real presence of that to whom is represented… And according to the best knowledge of The International Marian Library this is the only Icon of Our Lady Mediatrix of All Graces®in the world.”

Dr. Miravalle then announced in his recorded talk, “on behalf of ‘Vox Populi Mariae Mediatrici’ all [200] Bishops, Archbishops, Priests, Cardinals, Theologians, and Marian Leaders will receive ‘Special Gifts’ of large, gold framed Icons of ‘Our Lady Mediatrix of All Graces’”. Dr. Miravelle also announced “Along with these beautiful Icons, each would also receive a booklet explaining the Icon and its over 100 Iconographic details, along with a personally addressed letter about the Mediatrix Icon gifts provided by Vox Populi Mariae Mediatrici!”

These two International Conferences in 1997 and 1998 were part of a worldwide movement asking for the proclamation, in part, of “Our Lady Mediatrix of All Graces®” as an infallible Dogma. At present, over 600 bishops, 47 cardinals, and 8,000,000 people from 165 different countries in all 6 continents have signed and sent petitions to Rome requesting this proclamation in the last 17 years. This constitutes the largest petition drive per annum in the history of the Church. At Vatican II, nearly all 2,400 Bishops present asked that the Catholic Church solemnly proclaim “The Doctrine” of Our Lady Mediatrix of All Graces “a Dogma.”

At the conclusion of the 1998 International “…Mary Mediatrix Conference” in Rome honoring Our Lady Mediatrix of All Graces®,– that we were invited to attend with the Original Icon, with accommodations provided for – the Original, Marian Doctrine Icon Our Lady Mediatrix of All Graces® was on an easel near the altar during a special mass concelebrated by 110 Bishops, Archbishops, Priests, Monsignors, and Cardinals from 55 Different Countries. 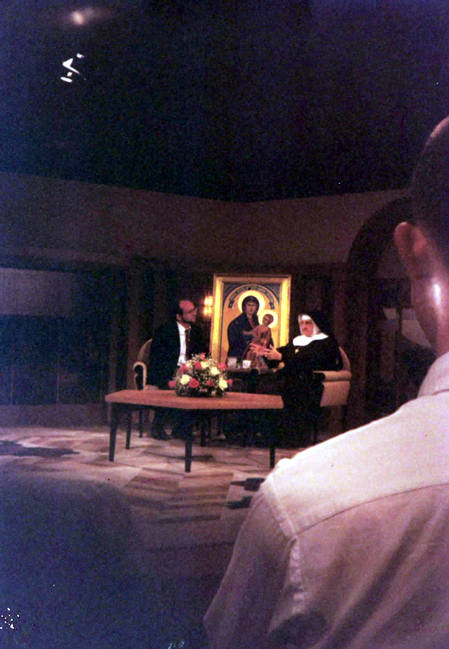 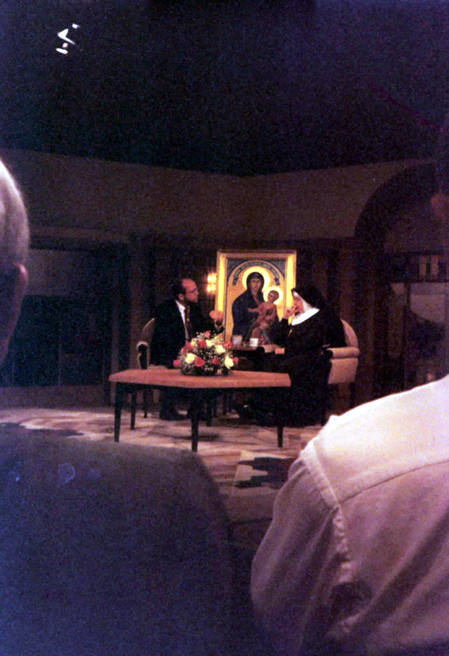 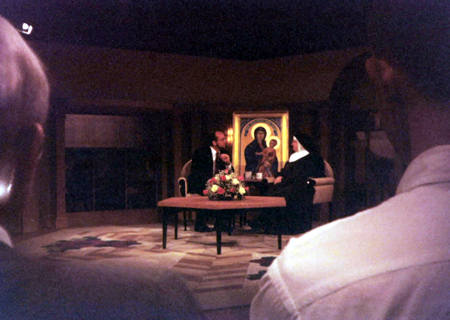 Dr. Mark Miravalle, also a deacon, later blessed the Mediatrix Icon, and signed the back of this Icon with Deacon Bill Steltemaier, the President and Co-founder of worldwide E.W.T.N., Eternal Word Television Network. Click here to see photos of the Icon at Vox Populi Maria Mediatrici International Conferences in Rome and at the altars at the Masses.