ICON IN ST PETER’S WITH PIETA AND PAPAL BASILCA’S

The Magnificent Icon of Our Lady Mediatrix of All Graces® was then placed on a large easel next to Michelangelo’s Magnificent Pietà “The Greatest Sculpture in the World” - inside the very protected glassed-in area that shields The Pietà. It was on Our Lady Mediatrix of All Graces original Feast Day. Despite every effort to get The Miraculous Icon® away from The Pietà – even with the direct-in-person appeal to the Basilica’s security guards from Roman Curia Cardinal Stafford (who then blessed the Icon), the original Mediatrix Icon was by a very great grace and alleged sign, for all to see, so very wonderfully mysteriously left next to the Pietà, inside Saint Peter’s Basilica, for exactly 33 hours: allegedly for the 33 years Jesus was on earth.

Directly after Pope John Paul II singularly blessed the Original Icon of “Our Lady Mediatrix of All God’s Graces” next to The Pietà in Saint Peter’s Basilica, Holy Father went outside Saint Peter’s Basilica to the Altar at the top of Saint Peter’s Square and celebrated mass for 500,000 representatives of the World’s Ecclesial Movements and Catholic Organizations from all over the world! Before imparting his final blessing of that Papal Mass [with ‘Our Lady Mediatrix of All of God's Graces' Icon nearby, inside Saint Peter's Basilica], Pope John Paul II stated to all of the world’s representatives in a profound, telling reflection: “We feel the special presence of the Mother of Jesus, Mary most holy, in the center of this Roman and universal Cenacle…. We commend to the Queen of Apostles the (Ecclesial) movements and other forms of missionary commitment which have arisen in recent years. In Mary’s hands we place the universal mission of the whole Church….” (Pope John Paul II’s profound reflection was in the front page feature story entitled “We place Church’s mission in Mary’s hands”, with a photo of the 500,000 at Mass, in The Vatican’s Official Newspaper, L’Osservatore Romano June 3,1998.) 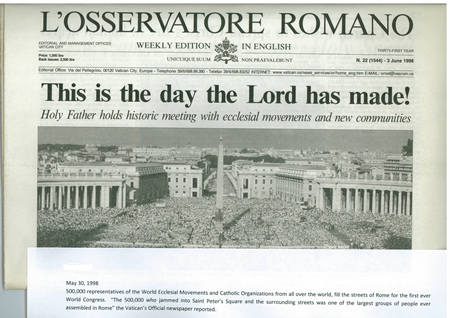 OUR UNIQUE ICON is also “The Only one of Our Lady Mediatrix of All God’s Graces… in the World.” This was documented by the Chief Librarian of The World’s Largest Marian Library who researched over 22,000 images of Mary from all over the world. The Church’s “Doctrine” of Mary’s vital Role as Mediatrix and Dispenser of All Graces is explicitly and definitively portrayed only by this Sacred Mediatrix Icon. It was ALMOST unanimously declared A “DOGMA” by all the 2,400 Bishops of the World who were at Vatican II – and was again being considered.

Click Store Now to buy Lifelike, Exquisite, Museum-Quality Fine Art Reproductions of The Miraculous Icon Our Lady Mediatrix of All Graces in Iconic Picture Frames at 60% Discount – for short time only!!!

Twenty-four Archbishops and Bishops prayed the Rosary before the Sacred Icon of Our Lady Mediatrix of All Graces® in “The Sistine Chapel” of the Basilica.

On May 13, of that same year, the Sacred Mary Mediatrix Icon was greatly honored to be in the second largest church in the world, SAINT PAUL OUTSIDE THE WALLS PAPAL BASILICA in front of the Tomb of Saint Paul The Apostle at the immense main altar, at a Special Mass, concelebrated by 24 Archbishops and Bishops!

Also on the Feast Day of Our Lady of Fatima May 13, 1999, the Fatima-related Icon, Our Lady Mediatrix of All Graces® was at the main altar in SAINT JOHN LATERAN PAPAL BASILICA with 24 Archbishops and Bishops.

On May 16, 1999, the Sacred, original “Mary Mediatrix Icon” was placed on the right rear side of Pope John Paul II’s temporary Outdoor Altar at the top of the steps, directly in front of Saint Peter’s Basilica, for the outdoor Sunday Papal Mass with over 300,000 people in attendance.

During “Mary’s Month” of May, “The Sacred Mary Mediatrix Icon” was honored to be placed directly on the 1st Century “Holy Staircase” from the Praetorium of Pontius Pilate, that Jesus walked during The Passion, and that Saint Helena had brought to Rome – with Jesus’ alleged blood spots still visible on it, through covered see-through shields.

The Sacred Mediatrix Icon was in the 2nd Century Catacombs of the martyred saints in Rome. 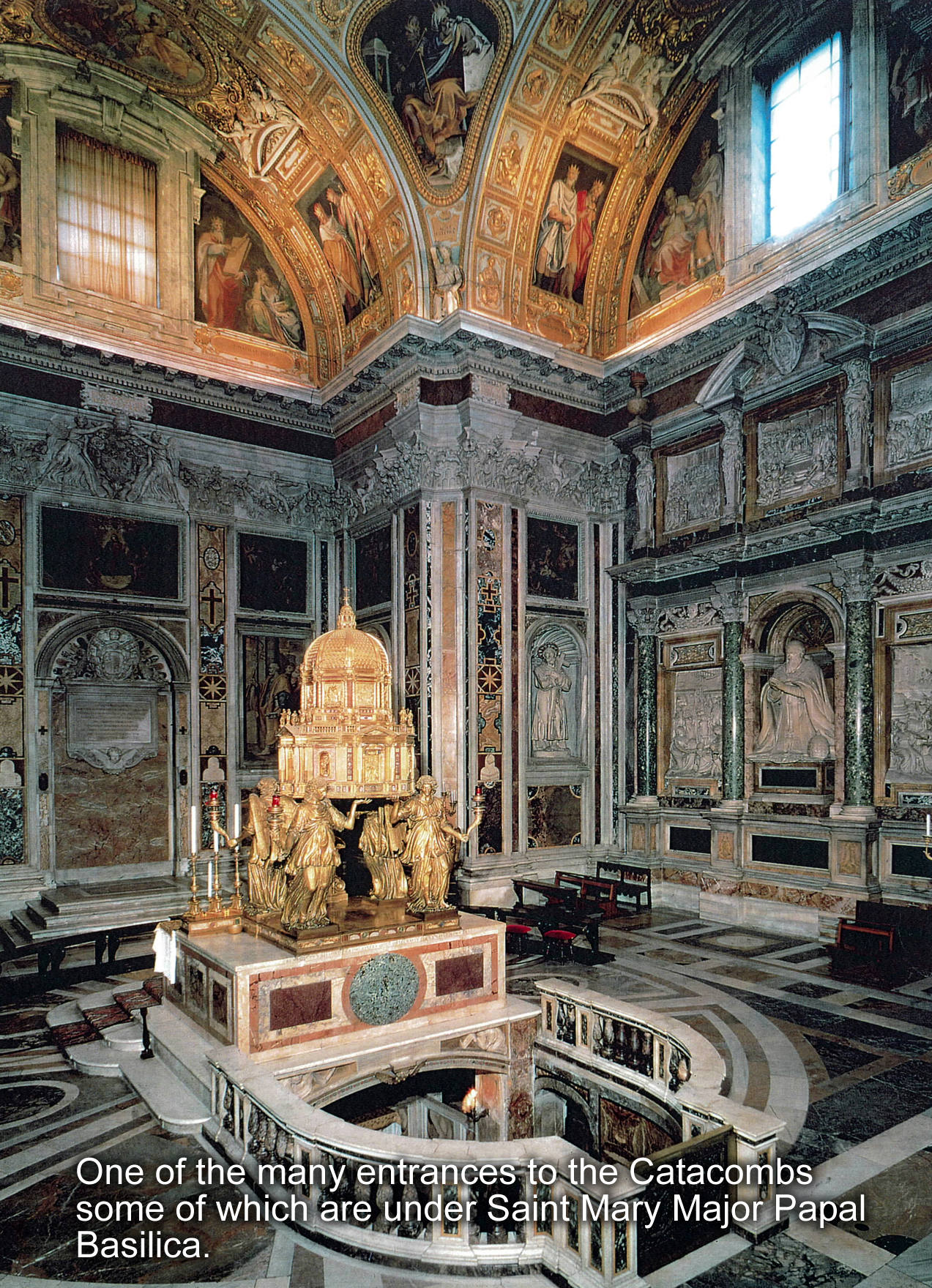 The Sacred Mary Mediatrix Icon was also at the Altar in the 3rd Century BASILICA OF SANTA MARIA TRASTEVERE – the very first and oldest church in the world, and the first Church dedicated to Mary founded, in the year 217 A.D.

The Original Icon was at the Altars in the 6th Century BASILICA OF SANTA MARIA IN COSMEDIN.

Our Lady Mediatrix of All Graces® Sacred Icon was in the 5th Century ancient MONASTERY CHURCH OF SAINT LUCY OF SYRACUSE built in the year 440 A.D.

"Our Lady Mediatrix Icon" was in the ancient CHAPEL OF SAINT PEREGRINUS in Vatican City. 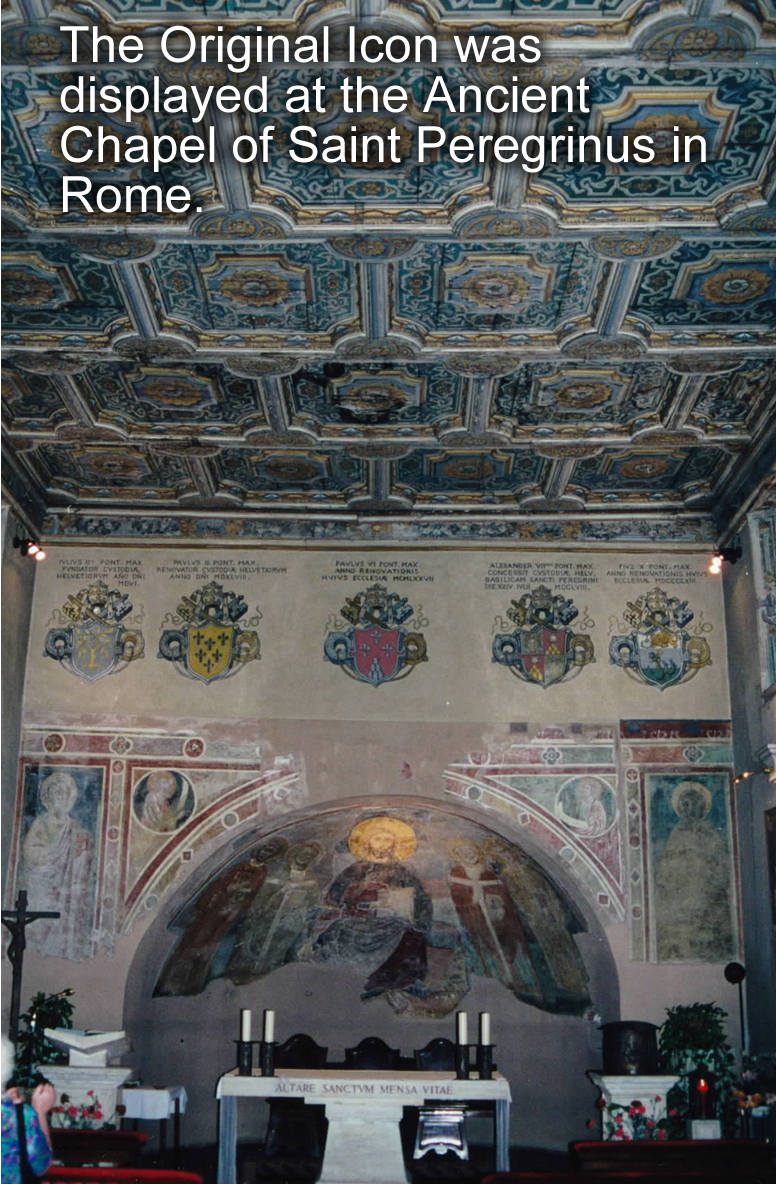 Our Lady arranged and designed that The Original Mary Mediatrix Icon be in THE CHURCH OF THE HOUSE OF MARY on May 31, 1997, the Feast of “The Visitation”. The Sacred Mary Mediatrix Icon was at the Altar at a Solemn High Mass in 1997 concelebrated by 2 Cardinals, 14 Archbishops, 42 Bishops, and 23 Priests from 40 different countries!

Our Lady also arranged that on May 31, 1998, the Original Miraculous Icon, Our Lady Mediatrix of All Graces® be on that same altar at a Solemn High Mass, concelebrated this time by the Pope’s Curia Cardinal with 110 Bishops, Archbishops, Priests, and Monsignors from 70 different countries! 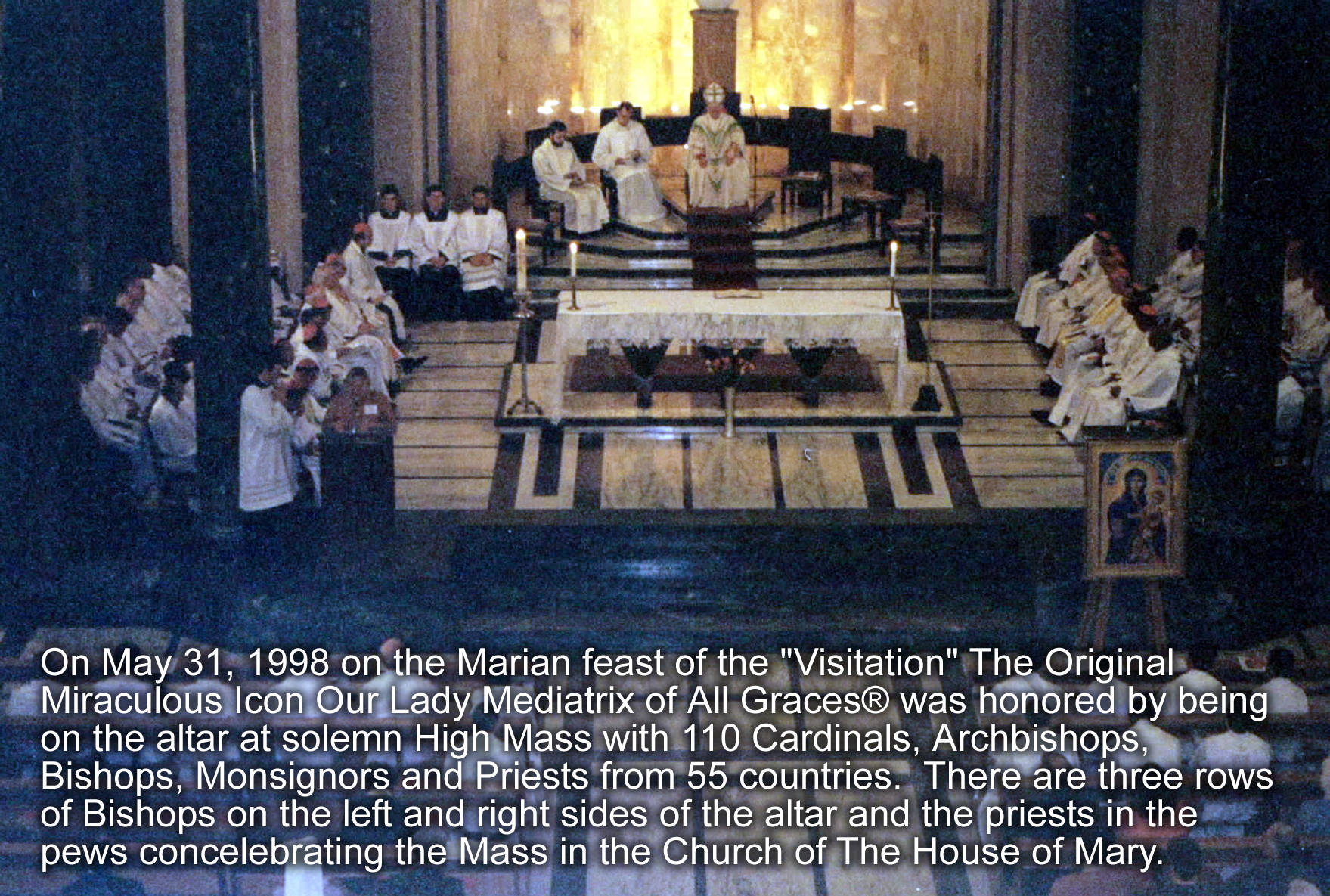 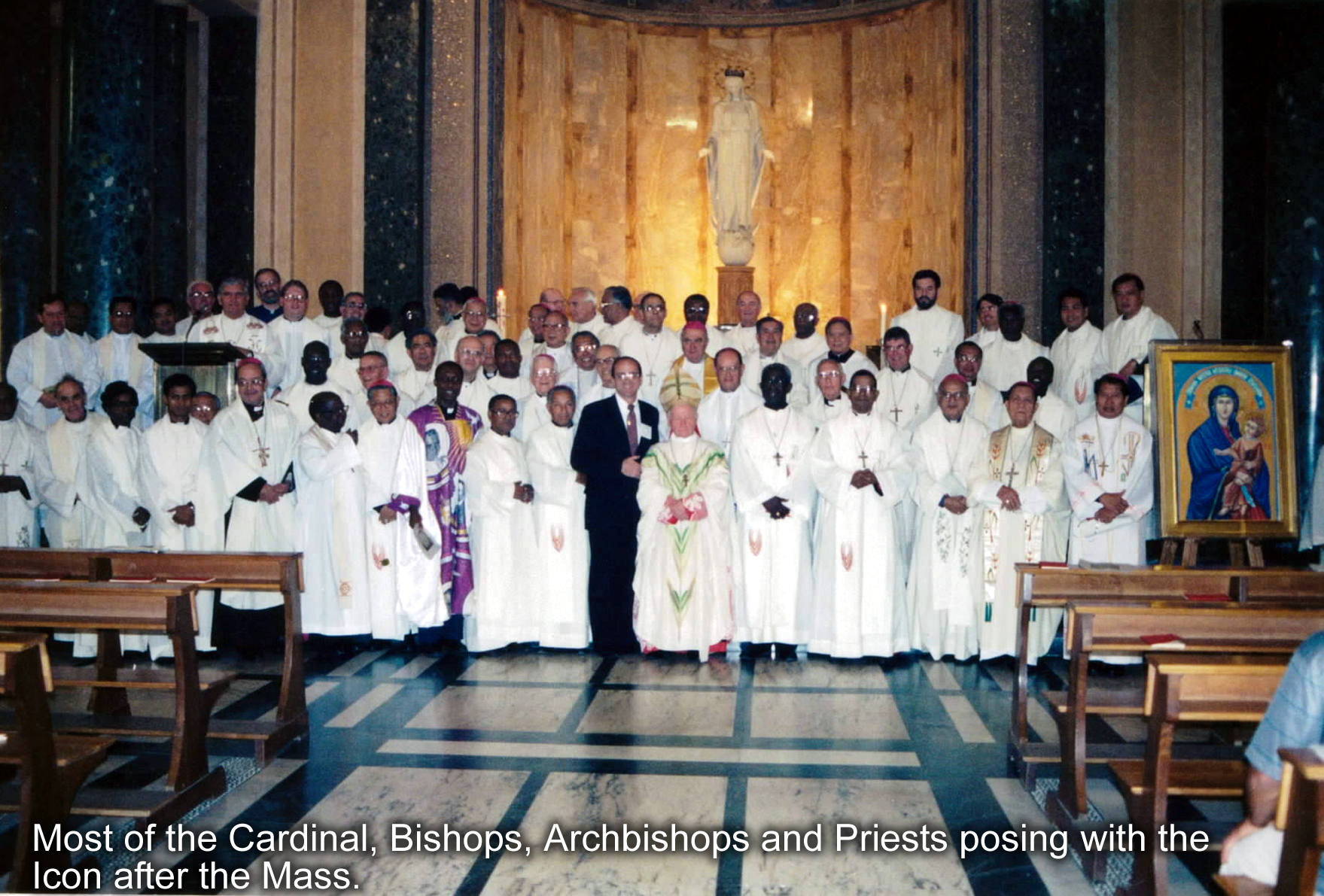