"MIRACLES" THROUGH OUR LADY ICON T-SHIRTS!

[NOTE: If the letter “F:” appears at the beginning of a sentence, it is for "Francis", Mary’s Way Director, asking questions.  The other Capital Letter is for the person answering the questions!]

In January 2000, Ed Karganilla, from the Philippines reported two astonishing "miracles" that happened to his two young sons, ages 7 and 8 years old through Our Lady Mediatrix Icon Tee Shirt!

Two of his children were bitten by the deadly malaria mosquito, resulting in a fatal disease known as Dengue!  As a result, both children were in total shock. This disease has a 90% mortality rate – 9 out of 10 people who are bitten die! This disease requires immediate hospitalization for blood transfusions.

Ed Karganilla called Mary’s Way Worldwide Apostolate in New Jersey and spoke with Francis Slinsky, the Director of Mary’s Way.   Ed was in California where he was visiting his mother at the time. Ed had received a frantic telephone call from his wife who reported that two of their children had been bitten by the deadly Dengue malaria mosquito.  Ed asked Francis to immediately Federal Express the largest Icon Tee Shirt of Our Lady Mediatrix of All Graces to his wife in the Philippines. Ed then called his wife and instructed her to take the children out of their separate hospital beds and place them in one bed only. Ed, then told his wife to wrap the huge XXX-Large Icon Tee Shirt of Our Lady Mediatrix of All Graces around both children who were in a coma.

Upon doing this, Ed’s wife called him and shockingly reported that both children had been completely healed and had walked out of the hospital 24 hours later!

Those afflicted with this deadly illness usually are shaking beyond control, in a stupor, and in a coma for 30 days, and usually require blood changes. This is another astonishing "miracle" through The Miraculous Icon® Our Lady Mediatrix of All Graces® Icon Tee Shirts! 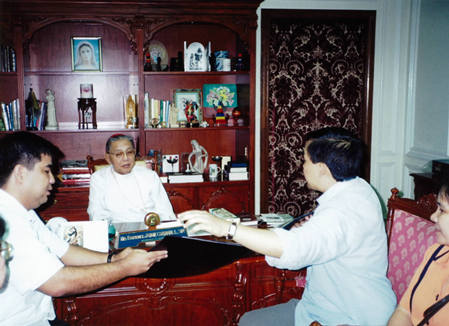 MARY L WRITES FROM LIBRARY, PENNSYLVANIA IN SEPTEMBER 1999 – ABOUT HEALING FROM CANCER THROUGH OUR LADY MEDIATRIX TEE-SHIRT

I’m writing to report that I wore the “Our Lady Mediatrix of All Graces” shirt prior to an operation. I’m happy to tell you that I had Cancer & am Cancer free. I had Cancer in my lung. The Cancer was removed & as it was in stage #1, I needed no chemo or radiation. I thank Our blessed Mother for her intercession for me.

©Copyright 2011-2012 With All World Rights Reserved by Francis Slinsky

I, Michelle P. Keenan, do hereby give my permission to Francis Slinsky, Director of Mary’s Way Prayer Center, where the original Miraculous Icon Our Lady Mediatrix of All Graces resides, the use of this video tape for the Cable TV broadcast Lumen Christi to be programmed March 1, 1999.

This Catholic program will be aired during Holy Week one month later. The use of this tape will show what the family and I saw as a "miracle". There is also footage of Brett’s therapy on this tape and you can see before and after behavior.

©Copyright 2011-2012 With All World Rights Reserved by Francis Slinsky